You base image will have different versions sooner or later, e.g. you may using node 0.20.xx for now, then you build your image for this version , then Node may update soon and it may become 0.30.xx, then you will create a new image for this new node.


Most docker images use tag(something like version) to do this. e.g. if you want to get an image of java 8, then you do :

the version number in above comands are tags of an image, then there is a new concept you need to know is docker image repo. java is a repo above, 8 is a tag of a image in this repo, so when you pull java:8 your docker client actually request docker hub to got to java repo to search an image which has "8" tag.

So tag is version, version is tag in docker.

Then how to add tags into image on my docker hub repos?

answer is  : you need to tag then locally, you can:

give tags to an image when you are building it:

or give tags after an image is built by:

After that, you can push them,

then you just need run :

it will push all versions/tags to your docker hub repo. 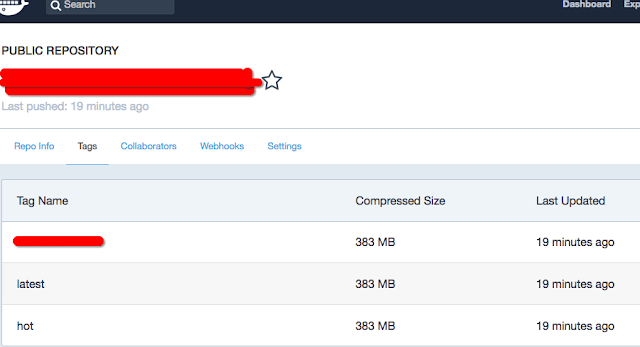 Then  when you run :

it will use the new image,  you can try below command to check:

it will show node version in the image.

Email ThisBlogThis!Share to TwitterShare to FacebookShare to Pinterest
Labels: docker